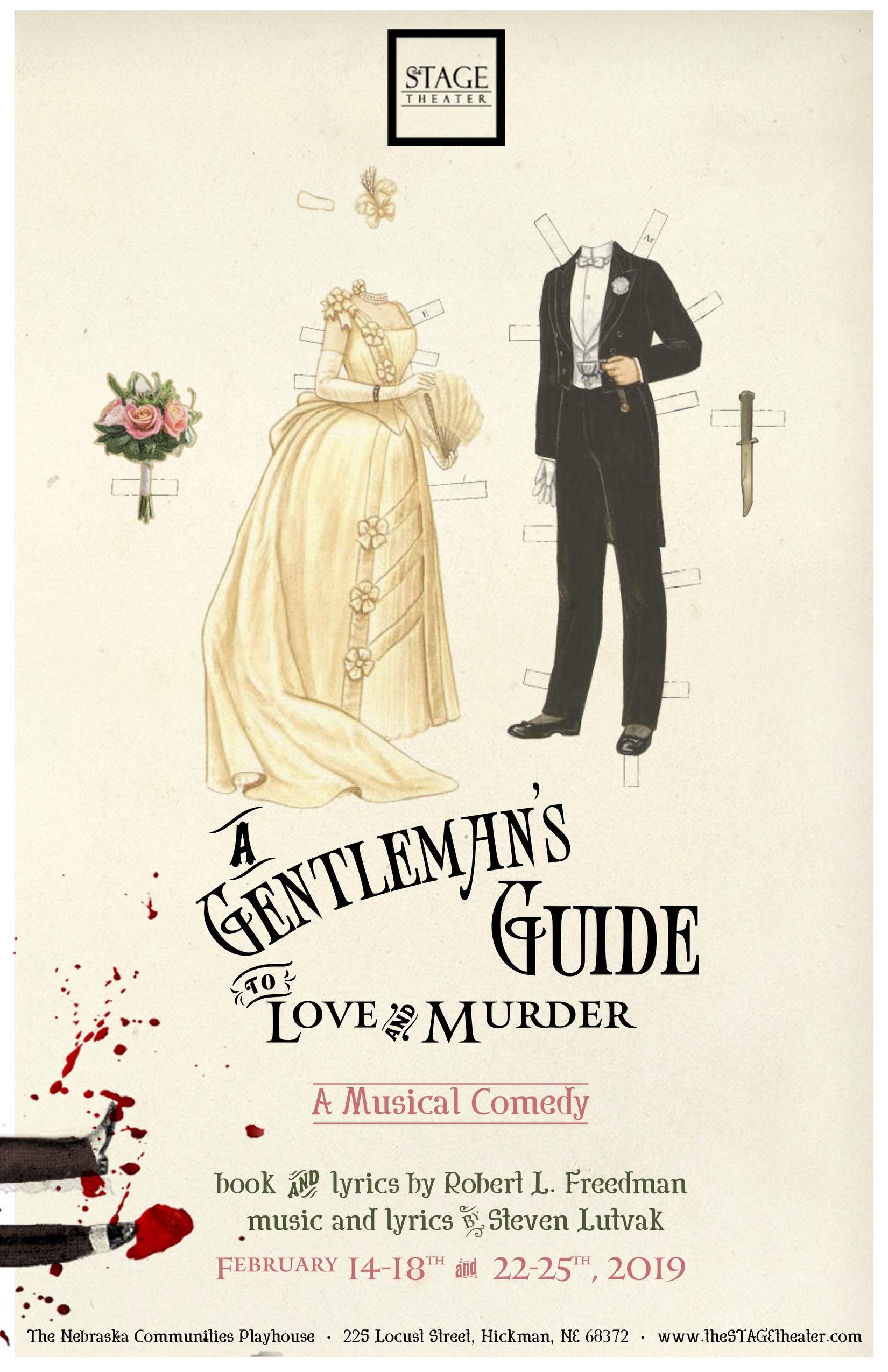 A GENTLEMAN's GUIDE to LOVE & MURDER

Music & Lyrics by Robert L. Freedman
Book & Lyrics by Steven Lutvak
Based on A Novel by Roy Horniman

A distant heir to a family fortune sets out to speed up the line of succession by using a great deal of charm… and a bit of murder. When the low-born Monty Navarro finds out that he’s eighth in line for an earldom in the lofty D’Ysquith family, he figures his chances of outliving his predecessors are slight and sets off down a far more ghoulish path. Can he knock off his unsuspecting relatives without being caught and become the ninth Earl of Highhurst? And what of love? Because murder isn’t the only thing on Monty’s mind… 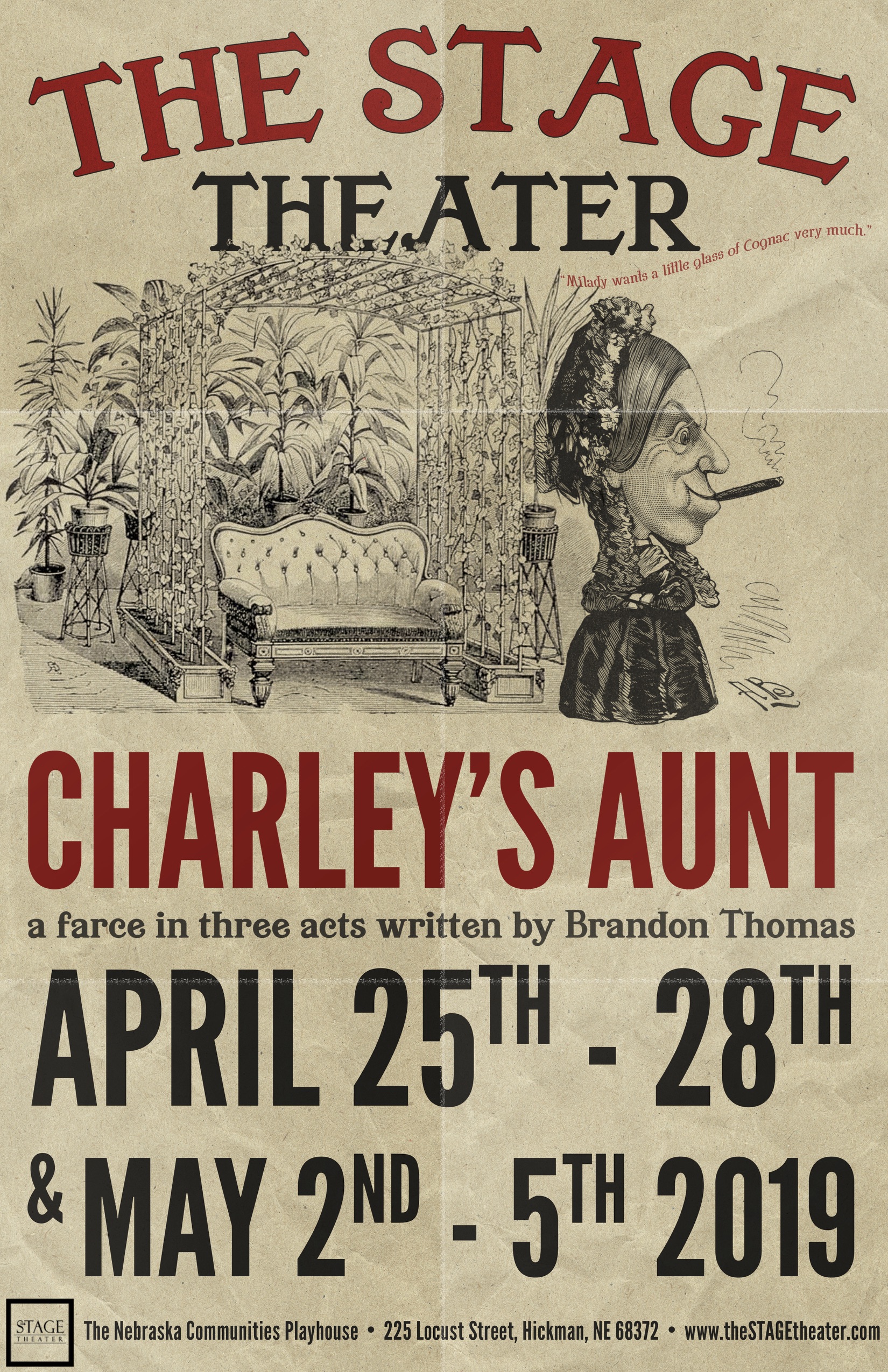 A Farce in Three Acts • Written by Brandon Thomas

Two young Oxford University ungraduates - Jack Chesney and Charles “Charley” Wykeham are in love with Kitty Verdun and Miss Amy Spettigue. With intention to profess their love, they invite the ladies of their affections to meet Charley's wealthy aunt from Brazil, Donna Lucia d’Alvadorez. Unfortunately, Donna Lucia cancels her visit at the last minute, and the millionaire aunt sends the boys into cataclysmic confusion. What do they do now? Could the problem be solved by drafting Fancourt Babberley - their feckless pal from university into a black satin skirt, bloomers and wig and pose as the millionaire aunt? Perhaps… though when Babberley as "Charley's Aunt," the charming frump is introduced to the ladies and Donna Lucia shows up last minute - classic comedic confusion ensues!

With proclamations of love, slamming doors and mistaken identities - this fast-paced farce has had audiences in stitches for the last 126 years. Join us for CHARLEY’s AUNT in the spring of 2019. We assure you - this comedy is definitely no “drag!” 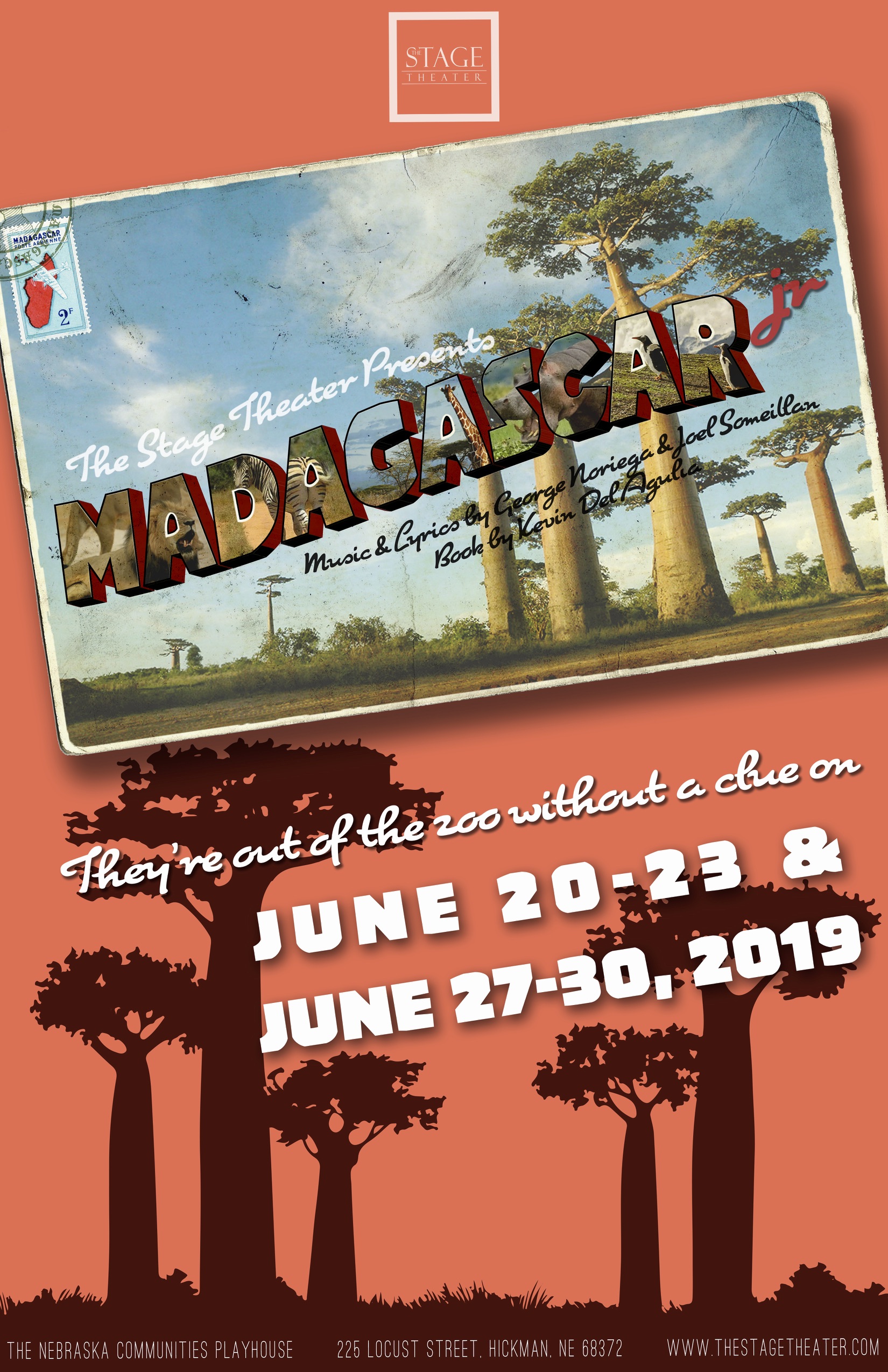 It’s out of the zoo and onto The STAGE with your favorite crack-a-lackin’ friends in the summer of 2019!

Alex the Lion, king of the urban jungle, is the main attraction at New York's Central Park Zoo. He and his best friends – Marty the Zebra, Melman the Giraffe and Gloria the Hippo – have spent their whole lives in blissful captivity before an admiring public and with regular meals provided for them. Not content to leave well enough alone, Marty lets his curiosity get the better of him and makes his escape – with the help of some prodigious, plotting penguins – to explore the world. He is joined by his pals on an unexpected journey to the madcap world of King Julien’s Madagascar.

Filled with outlandish characters, adventure galore and an upbeat score, MADAGASCAR - A Musical Adventure, Jr. (based on the blockbuster Dreamworks film) will leave you with no choice but to “Move It!, Move It!” 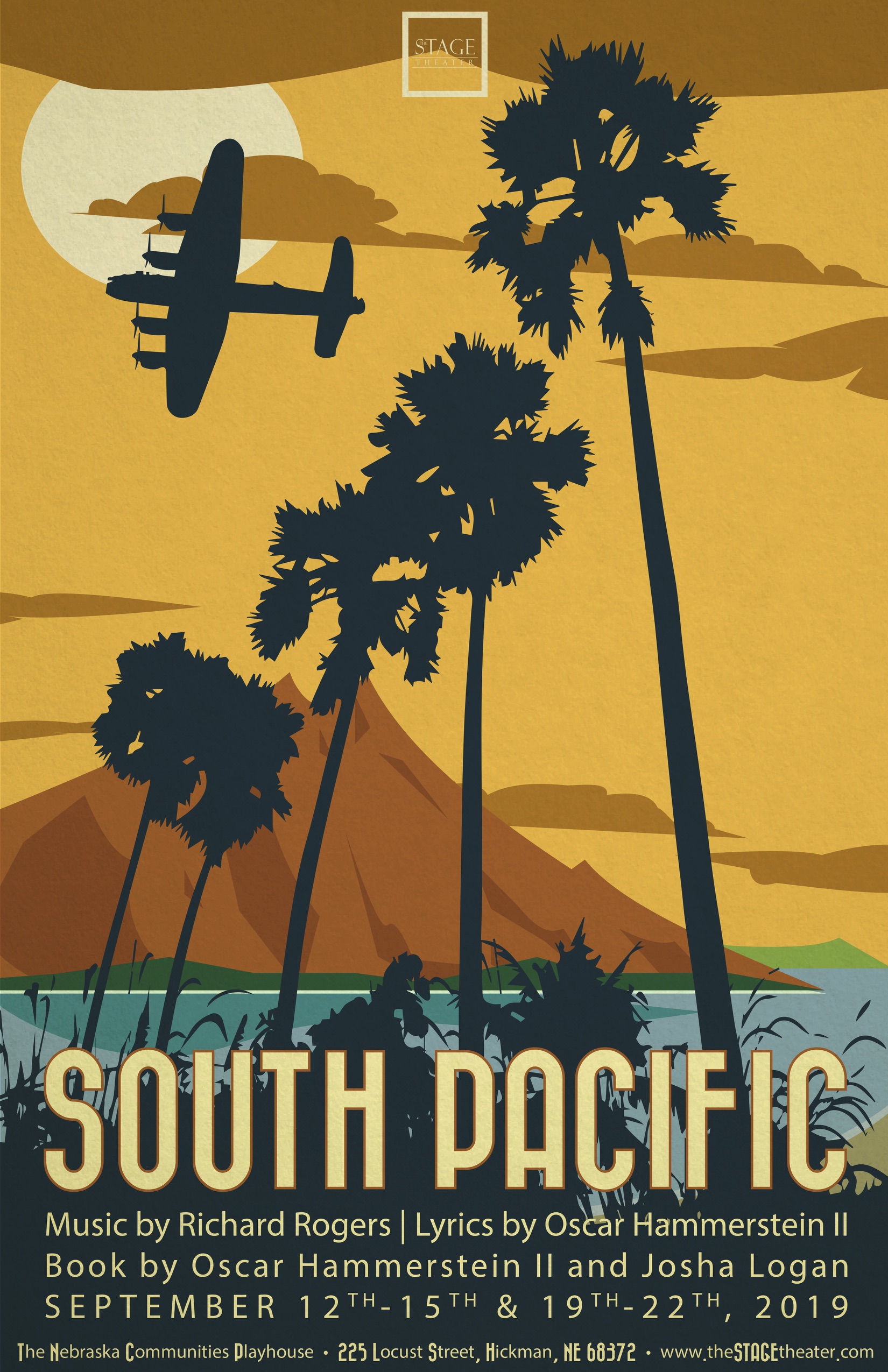 Set in an island paradise during World War II, two parallel love stories are threatened by the dangers of prejudice and war.

Nellie, a spunky nurse from Arkansas, falls in love with a mature French planter, Emile. Nellie learns that the mother of his children was an island native and, unable to turn her back on the prejudices with which she was raised, refuses Emile's proposal of marriage. Meanwhile, the strapping Lt. Joe Cable denies himself the fulfillment of a future with an innocent Tonkinese girl with whom he's fallen in love out of the same fears that haunt Nellie. When Emile is recruited to accompany Joe on a dangerous mission that claims Joe's life, Nellie realizes that life is too short not to seize her own chance for happiness, thus confronting and conquering her prejudices.

With music & lyrics by the incomparable Richard Rodgers & Oscar Hammerstein II, featuring songs such as “I’m Gonna Wash That Man Right Outta My Hair,” “There Is Nothing Like A Dame” and “This Nearly Was Mine,” we guarantee you an “enchanted evening” in the fall of 2019. 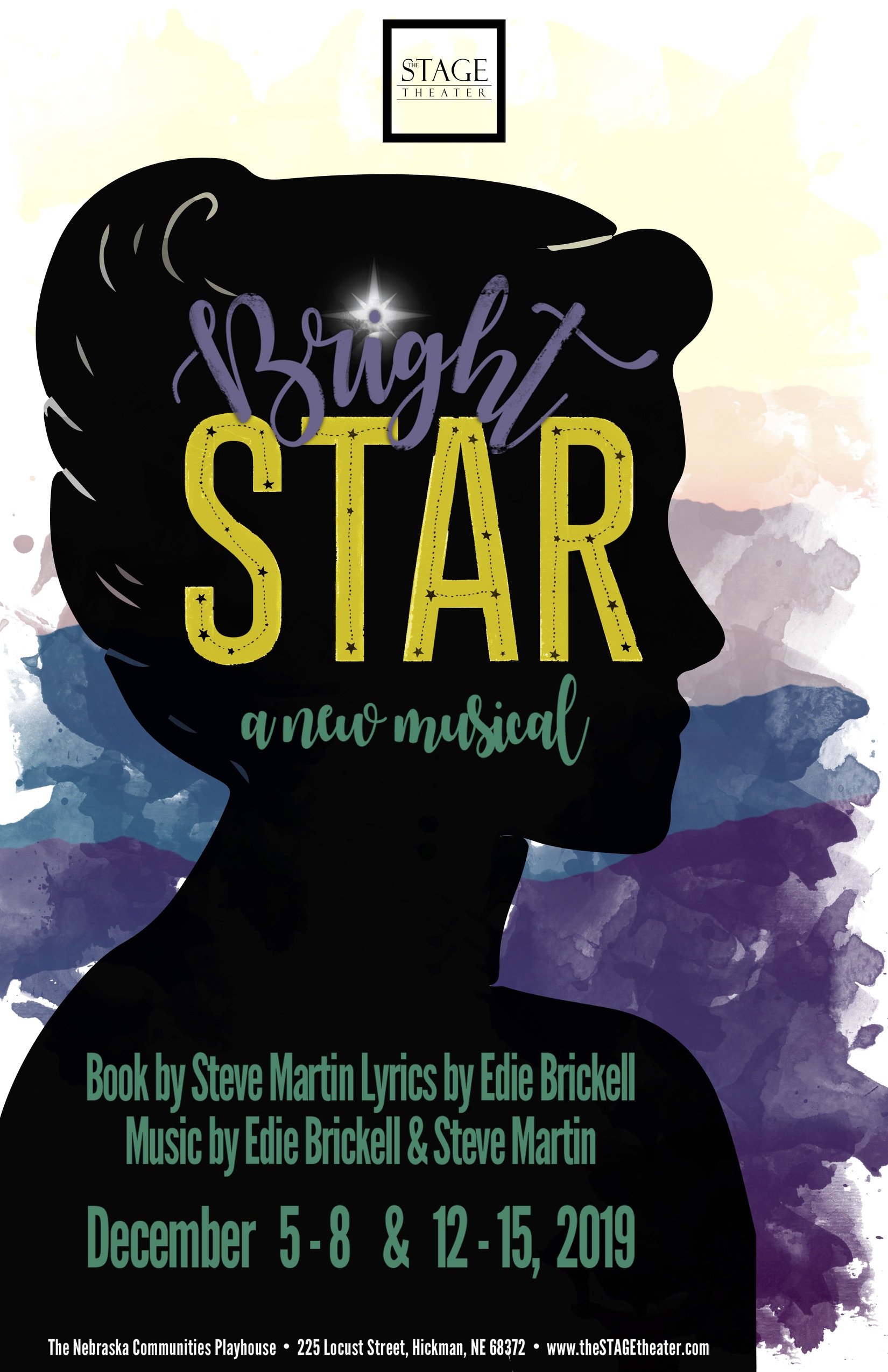 Inspired by true events and featuring the Grammy-nominated score, BRIGHT STAR tells a sweeping tale of love and redemption set against the rich backdrop of the American South in the 1920s and ‘40s Blue Ridge Mountains.

When literary editor Alice Murphy meets a young soldier just home from World War II, he awakens her longing for the child she once lost. Haunted by their unique connection, Alice sets out on a journey to understand her past - and what she finds has the power to transform both of their lives. The story unfolds as a rich tapestry of deep emotion, beautiful melodies and powerful storytelling

BRIGHT STAR - an uplifting theatrical journey that holds you tight in its grasp, filled with passion, restoration and healing is as refreshingly genuine as it is daringly hopeful. Join us for BRIGHT STAR, shining on The STAGE for the 2019 Holiday Season.